100 years of wisdom from Fairmount Bagel

A bakery that's been in the family for three generations

Fairmount bagels on the space mission

The very first bagels have just made it into outer space thanks to astronaut Greg Chamitoff, who managed to take the famous products of the Original Fairmount Bagel Bakery with him in the shuttle. “It’s fantastic, we are very flattered,” said Mona Chamitoff, the astronaut’s aunt and owner of the Fairmount Street store. According to Mona, her nephew loves these bagels and just couldn’t imagine leaving Earth for six long months without his favourite indulgence. The 45-year old astronaut wanted to lift off for the International Space Station with no less than 18 of these delights. 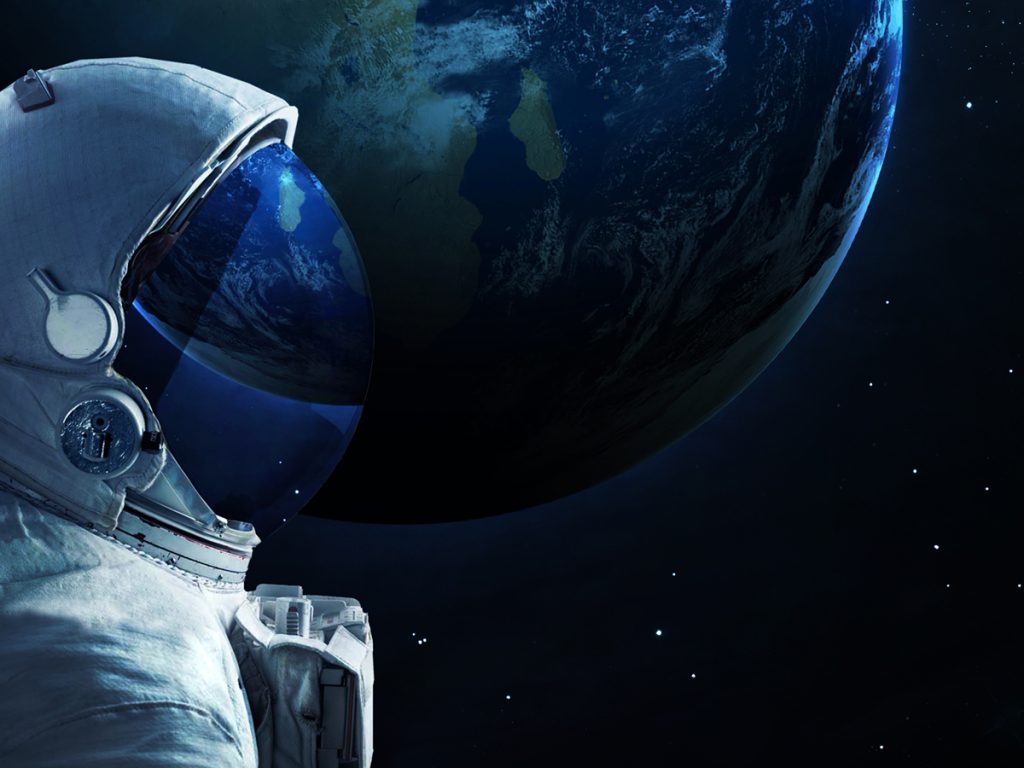 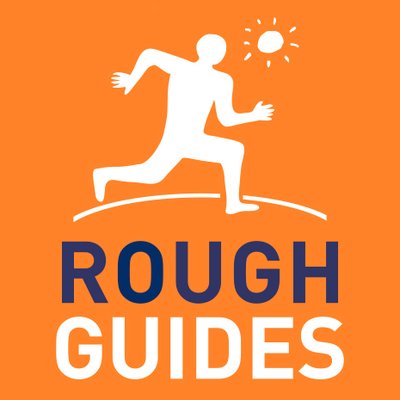 If a bagel war broke out, it would probably come down to Montréal and New York City. Montréal rivals NYC as a bagel capital, and you can sink your teeth into chewy bagels throughout the city, from casual delis to stylish cafes. History has a lot to do with it: bagels were introduced to Montréal by Jewish immigrants, many from Eastern Europe, and one of the best-known historic delis include Fairmount Bagel Bakery.

The painting FAIRMOUNT BAGEL IN WINTER by Carole Spandau was chosen to represent the Plateau Mont-Royal in their Fall 2013 exhibit at the Pointe-à-Callière Museum in Montreal. 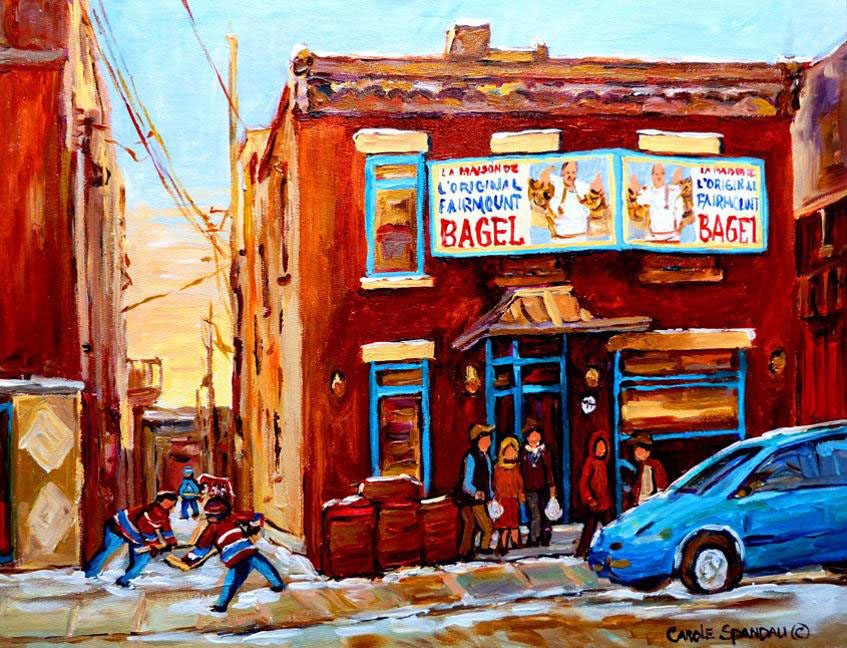 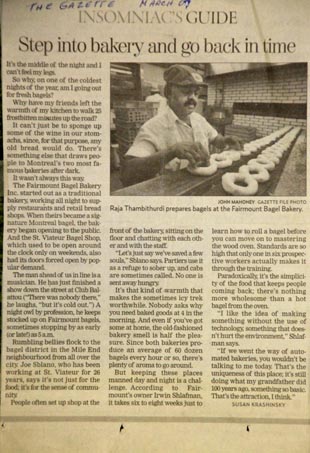 It’s the middle of the night and I can’t feel my legs. So why, on one of the coldest nights of the year, am I going out for fresh bagels? Why have my friends left the warmth of my kitchen to walk 25 frostbitten minutes up the road? It can’t just be to sponge up some of the wine in our stom-achs, since, for that purpose, any old bread would do. There’s something else that draws peo-ple to Montreal’s two most fa-mous bakeries after dark.

It wasn’t always this way.
The Fairmount Bagel Bakery Inc. started out as a traditional bakery… […]

Montreal has long been known as the bagel capital of Canada — and Fairmount Bagel is why. There have been many imitators since Isador Shlafman started the city’s first bagel bakery in 1919 (it remains a family business), but there’s something about these hand-rolled treats that, aficionados say, gives them the edge. Maybe it’s their thin shape, or their chewiness, or the freshness. 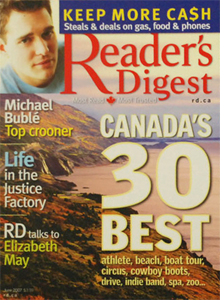 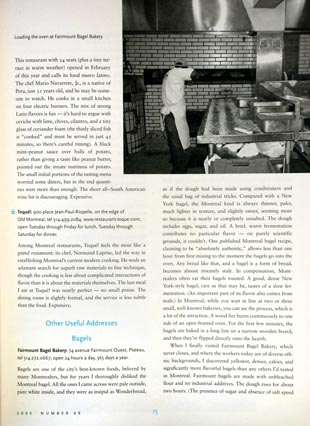 Bagels are one of the city’s best-known foods, beloved by many Montrealers, but for years I throughly disliked the Montreal Bagel. But when I finally visited Fairmount Bagel Bakery, which never closes, and where the workers today are of diverse ethnic backgrounds, I discovered yellower, denser, cakier, and significantly more flavorful bagels than any others I’d tasted in Montreal.

From dawn until dusk and all through the night, a fire blazes in the wood-burning oven and the bagels come out, warm and golden, ready to be delivered or sold on site. The place has a soul, with its non-stop hustle and bustle, and the homey feeling of a house converted into a bakery by Irwin Shlafman’s grandfather. 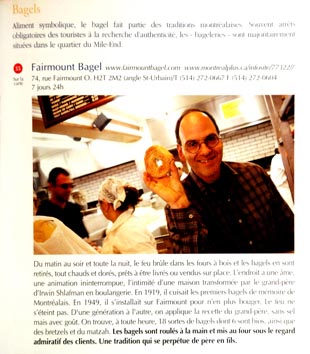 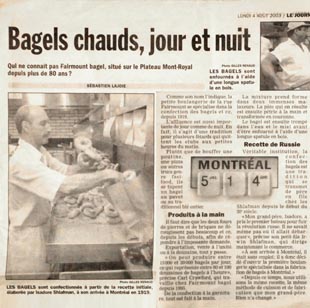 As its name indicates, the little bakery on Fairmount Street specializes in making bagels, and has done so since 1919. The store is as busy at night as it is in the daytime. In fact, it’s a customary stop for many night clubbers, after leaving the bars in the wee hours of the morning. Rather than a poutine, pizza or other such fast-foods, they go for a poppy seed or traditional whole wheat bagel. A veritable institution, making bagels is a tradition that has been handed down from father to son in the Shlafman family since the early 1900s

From dawn until dusk and all through the night, a fire blazes in the wood-burning oven and the bagels come out, warm and golden, ready to be delivered or sold on site. The place has a soul, with its non-stop hustle and bustle, and the homey feeling of a house converted into a bakery by Irwin Shlafman’s grandfather. 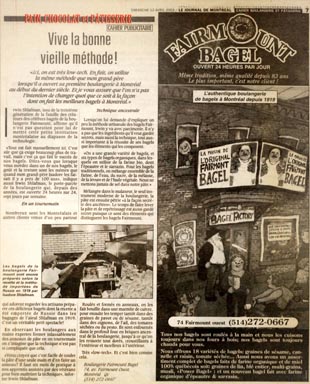 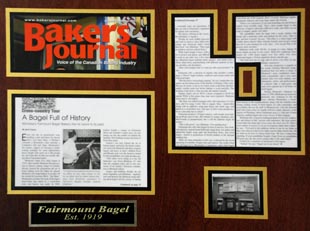 Every city has its gastronomic icon, recalling a time and place for anyone who’s ever been there; a Parisian’s croissant, a Bostonian’s clam chowder, a Londoner’s fish-and-chips. Montrealers? No contest… bagels.

It’s become a cliché: waxing nostalgic for some high-protein, heavy dough with seeds on it. But people do, and when they do, they’re usually talking about Fairmount bagels.

When I think of Montreal, the image that comes to mind is that of bagels, freshly baked sesame bagels to be exact. and lots of them. I grew up in Montreal and recently moved away to pursue a university degree. I find it impossible to find anything that even resembles the Montreal bagel! I am also reminded of a blend of many things that I consider to be Montrealish — including smoked meat, millefeuille, poutine and souvlaki — as well as events such as the Jazz Festival and, of course, surviving the infamous storm of ’98 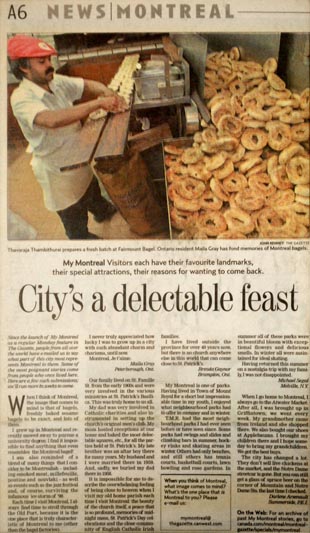 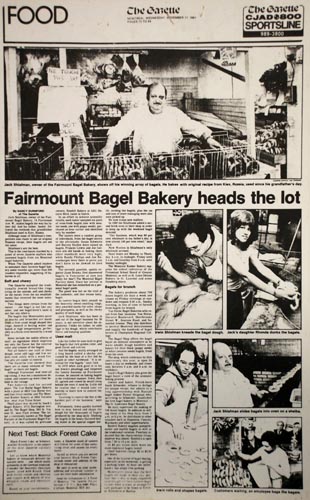 Jack Shlafman, owner of the Fairmount Bagel Bakery, 74 Fairmount Ave. W., makes bagels the way his father did. And his father, Isador, followed the methods that grandfather Shlafman used in Kiev, Russia. Although most of Shlafman’s competitors also claim to use an original Russian recipe, their bagels are not the same. Shlafman’s are the best.